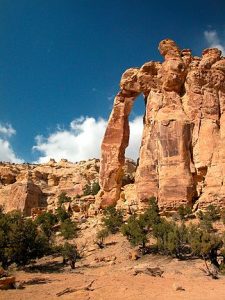 Eagle Canyon in the San Rafael Swell, Utah, the location of one of 130 oil and gas leasing parcels being challenged in court for failing to consider the impact on climate. The plaintiffs, the Southern Utah Wilderness Alliance, the Center For Biological Diversity, and Living Rivers charges the Trump administration with succumbing to pressure from the fossil fuel industry in the name of company profits.

The complaint, filed in U.S. District Court in Salt Lake City, says the Bureau of Land Management violated the National Environmental Policy Act by approving five lease sales from 2014 to 2018 without accounting for the climate pollution that would result from oil and gas development. It asks the court to invalidate all five approvals and their 130 leases.

“The climate crisis is being exacerbated by the BLM’s reckless and uninformed oil and gas leasing and development on public lands,” said Landon Newell, staff attorney with the Southern Utah Wilderness Alliance. “The development of these leases will push us closer to the point of no return on climate, while sacrificing some of the most wild, scenic and culturally significant public lands in America.”

Most of the challenged leases resulted from the Trump administration’s “energy dominance” agenda. In addition to slashing environmental reviews to hasten oil and gas leasing, the administration has attacked federal development and reliance on climate science in agency decisions and reports.

“Each new oil and gas lease commits us to more greenhouse gas pollution that our planet can’t afford,” said Diana Dascalu-Joffe, an attorney at the Center for Biological Diversity. “There are already more fossil fuels under development in the world than can be safely burned. New leases dangerously disregard urgent climate warnings from scientists. These leases were irresponsible and illegal, and we’re hopeful that a court will agree.”

The leases also threaten public lands and endangered species, including the Colorado pike minnow and razorback sucker. Fracking sucks up enormous amounts of water and threatens to pollute the Colorado River and tributaries where the fish live.

“Several accidents involving water pollution have already happened on the Green River and its tributaries,” said John Weisheit, a professional river guide in eastern Utah and a representative of Living Rivers and Colorado Riverkeeper. “Combined with diminished flow volumes for these rivers, the multimillion-dollar investment already made to ensure a successful endangered fish program must not be further compromised.”

About a quarter of all U.S. greenhouse gas emissions are caused by federal fossil fuel production. Peer-reviewed science estimates that a federal fossil fuel leasing ban would reduce CO2 emissions by 280 million tons per year, ranking it among the most ambitious federal climate policy proposals in recent years.

This site uses Akismet to reduce spam. Learn how your comment data is processed.